Back to World forum

Scenic Lake Nakuru is Kenya’s most popular national park. The park’s main feature is a large, shallow lake supporting great birdlife, including big flocks of pelicans and variable flocks of flamingos. The lake was once famous for its flamingos, however, since 2012, conditions have become unfavorable for these birds and most have moved to other Rift Valley lakes.

Wildlife & Animals – Lake Nakuru National Park
Lake Nakuru offers easy wildlife viewing of most big safari animals with the exception of elephants. Black and white rhino were re-introduced in the 1990s and have bred to healthy populations. The white rhino is usually easy to see on the lakeshore. Rothschild giraffe, buffalo, and hippo are numerous as well. Lucky visitors might see lions, which occasionally climb trees. Leopards are present, but not often encountered.
Most big safari animals are present in Lake Nakuru NP with the exception of elephants. The park is known for its populations of black and white rhino. The white rhino is particularly conspicuous, and different groups can be encountered throughout the day. Hippo, waterbuck, Burch ell’s zebra, and Thomson's gazelle are common on the floodplains.

Wildlife Highlights
The park is an important stronghold for the rare Rothschild's giraffe. It was introduced to the park in the 1980s and has now become locally common. Aside from the widespread vervet monkey and olive baboon, the beautiful black-and-white colobus monkey can sometimes be found in the acacia forest. Highlights, if you’re lucky enough, are the tree-climbing lions, Lake Nakuru NP is the best place in Kenya to see them.

Best Time for Wildlife Viewing
Lake Nakuru can be visited throughout the year, but wildlife viewing might be more difficult in April and May, which are the wettest months. At this time, rain might interfere with your game drives and the grass tends to be very high making animal spotting more difficult.

The scenery of Lake Nakuru National Park is breathtaking. The Rift Valley escarpment, dotted with euphorbia trees, rises up from the lakeshore. Heavy mist usually shrouds the lake and surrounding yellow fever trees in the early morning.

Weather & Climate - Lake Nakuru National Park
Despite being near the equator, it rarely gets hot at Lake Nakuru, the mercury peaking at around 28°C/82°F in the first few months of the year. It’s the park’s altitude that cools everything down, particularly in the early morning when you’ll need your warmest clothing for game drives. The Dry season stretches from June to February, while the brief Wet season (March to May) is at its dampest in April.

Best Time to Visit - Lake Nakuru National Park
The usual problem with wildlife watching in the Wet season (March to May) is that animals disperse when the rains come. That’s not an issue at Lake Nakuru, though, because the national park is ringed by fencing. Still, the wet weather has been known to spoil more than a few game drives, so you might want to visit in the drier months of the year.

Birds in Lake Nakuru National Park
Lake Nakuru is a great birding destination with more than 500 species birds recorded. The soda lake is a birding hotspot and supports a lot of birdlife, including large flocks of pelicans. Unfortunately, flamingos are no longer the drawcard here as unfavorable conditions have driven many of them to other Rift Valley lakes. Nakuru is also one of the best places in Kenya to see the striking, long-tailed widowbird. There is a good variety of raptors including Verreaux’s and long-crested eagle.

Best Time for Bird Watching - Lake Nakuru National Park
The best time to visit the park for birders is from November to April. This is the breeding season and many birds are in full plumage. This is also a good time to tick of extra species as migrants from Europe and North Africa are present as well. Most interesting species are present throughout the year and therefore bird watching is good at any time. Although it’s good for birding, April tends to be very wet and is a less productive time for general wildlife viewing.

Best Time to Visit - Lake Nakuru National Park
Lake Nakuru offers good wildlife viewing throughout the year, but the rains might interfere with your game drives in the wettest months, April and May. Although there is great birdlife at the lake, conditions in recent years have become unfavorable for flamingos, which used to be a real attraction here. As a result, the flamingos have moved to other lakes in the Rift Valley.

Weather & Climate - Lake Nakuru National Park
Lake Nakuru’s climate is mild and temperatures are consistent year-round. Daytime temperatures are pleasant in the mid to upper twenties, although it is much cooler at nights. Warm clothing for early morning game drives is a necessity. The wettest months are April and May. The rest of the year is relatively dry with some rain throughout.
Dry season –June to February
The pleasant days are usually sunny but do not get too hot. It rarely rains, although don’t be surprised if there is an occasional shower at any time. It is recommended to wear warm clothing on early morning game drives.

June, July, August, September, October, November & December, Conditions are sunny with the occasional shower. Temperatures climb to around 25°C/77°F in the afternoon, but the beginning and the end of the day is cold with the temperature hovering around 9°C/48°F.
January & February. These months, before the rains break, are the driest and warmest in the calendar. Temperatures climb to 28°C/82°F and push higher. Be aware of the chill factor in the early morning when the temperature only crawls up to 9°C/48°F.

Wet season - March to May
There are many overcast, cloudy days in the Wet season, but it rarely rains all day. Temperatures in the afternoon are pleasant at around 27°C/81°F. Early mornings are a bit milder at 11°C/52°F. April is the wettest month.
March – March or April sees the beginning of the rains, although it is rare for March to see much rain. Expect temperatures in the afternoon to reach around 27°C/81°F.
April - The wettest month, but it doesn't rain for long stretches very often. May – The rains are already tapering off, but afternoon showers are still common.

Lake Nakuru can also be reached from several other parks. The distance from the Masai Mara is 235km/150mi and the driving time is about six hours. The distance from Samburu in the north is 300km/190mi and the drive takes about five and a half hours. Driving time from Laikipia Plateau hugely depends on which reserve you are coming from, but should be between three to seven hours.

Malaria & Safety – Lake Nakuru National Park
In our opinion, Lake Nakuru is a very safe park to visit. Security within the park is high, and there is no cause for concern when staying here. It is located next to the small town of the same name. However, one should always be cautious when walking around any towns in Kenya without a guide.
Malaria & Vaccinations - Lake Nakuru National Park
Several vaccinations are required before a trip to Kenya. Lake Nakuru is a shallow soda lake in the Rift valley and malaria is a big concern here. Precautions should be taken seriously. Apart from bringing antimalarials, the use of mosquito repellent (those containing DEET are most effective) and covering up exposed skin in the evening is highly recommended.

Wildlife Viewing - Lake Nakuru National Park
Visitors to Lake Nakuru should always respect safety precautions concerning wildlife. Listen carefully to the instructions given by your guide. Although incidents are very rare and there isn’t a need for paranoia, keep in mind the potential danger and unpredictability of wildlife encounters. 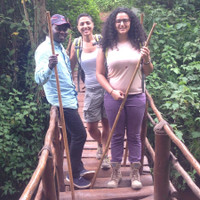